ALTANA’s half-year results: sales below the previous year due to the coronavirus; EBITDA margin declined slightly at a high level

ALTANA’s half-year results: sales below the previous year due to the coronavirus; EBITDA margin declined slightly at a high level

Wesel, August 14, 2020 – After a positive start to the year, in the first half of 2020 the specialty chemicals group ALTANA recorded an overall sales decline of nearly 7 percent to EUR 1,078 million in the wake of the coronavirus pandemic. This was primarily due to the strong decrease in demand in various industrial areas, above all the automotive sector. By contrast, consumer-related business segments such as PVC-free seals for conserved foods continued their growth trend. Adjusted for acquisition and exchange-rate effects, sales fell by 9 percent in total. Earnings before interest, taxes, depreciation and amortization (EBITDA) reached 202 million euros, also almost 9 percent below the previous year’s figure. Owing to countermeasures, ALTANA was able to keep the EBITDA margin with 18.7 percent (previous year: 19.2 percent) at a high level in the first six months of 2020.

In spite of the economic slowdown, in the first half of 2020 the Group increased its research and development expenditure by 3 percent compared to the same period last year. With a share of sales of almost 8 percent right now, ALTANA continues to invest above-average amounts in innovations, for example in the future digital printing market. For instance, ALTANA's internal startup ACTEGA Metal Print acquired its first beta customers and a sales partner for a novel technology that achieves decorative metallic effects with significantly less material, costs, and production time than the processes that have been commonly used thus far.

“Our longstanding customer proximity, our innovative and financial strength, and our decentralized structure are important success factors enabling us to safeguard our operating business even in this period,” says ALTANA CEO Martin Babilas. "Our top priority was to protect the health of ALTANA employees worldwide. At the same time, we not only managed to maintain our ability to supply our customers and provide them with service, but also to continue to invest in the future in a targeted manner.”

ELANTAS, a supplier of electrical insulation materials, achieved sales of 219 million euros, 12 percent down on the previous year’s figure in both nominal and operating terms.

ACTEGA continued its growth in the first half of 2020. Sales increased by 9 percent to 200 million euros. The acquisition of the Swiss company Schmid Rhyner AG, in particular, had a positive effect. Even when adjusted for acquisition and exchange-rate effects, ACTEGA recorded slight growth of one percent due to the continued good demand from consumer-related customer industries.

For the second half of the year, ALTANA expects the global economy to recover slightly and, as a result, expects a sales drop that will remain in the upper single-digit percentage range. 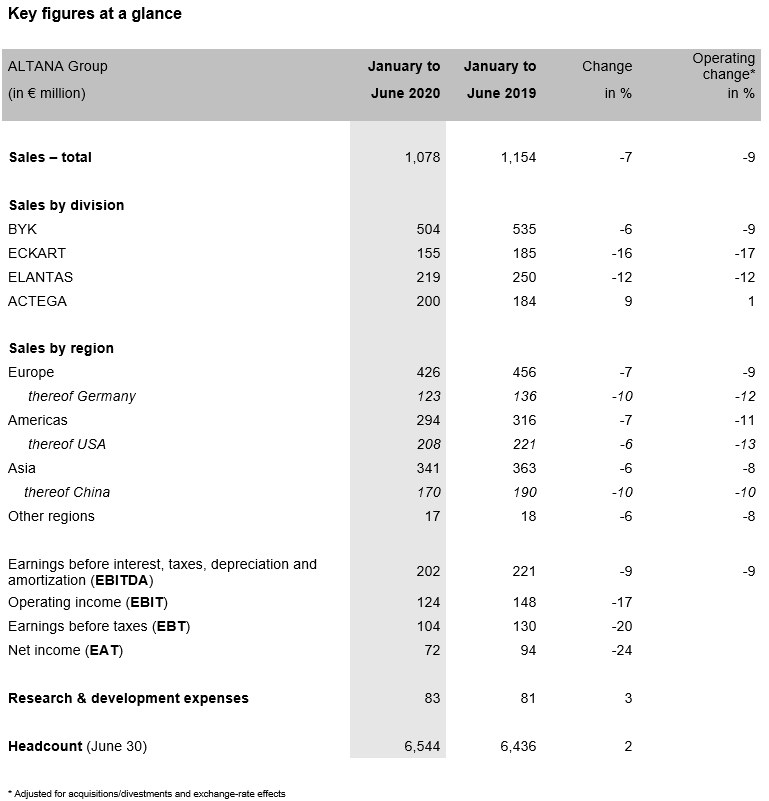 Headquartered in Wesel, Germany, the ALTANA Group has 47 production facilities and 65 service and research laboratories worldwide. Throughout the Group more than 6,500 people work to ensure the worldwide success of ALTANA. In 2019, ALTANA achieved sales of more than €2.2 billion. About 7 percent of sales is invested in research and development every year. Its high earning power and high growth rate make ALTANA one of the most innovative, fastest growing, and profitable chemical companies in the world.