Minimize the environmental impact of your systems!

BYK concentrates on aqueous systems as a technology of the future. Water-based coatings are the modern alternative to conventional systems. In most cases, they are just as efficient and easy to process, and are cost-effective and environmentally friendly to boot.

BYK is your competent partner for aqueous coatings.

At BYK laboratories all over the world, our employees develop custom solutions. Our application technology department offers you support in finding solutions to your current needs.
All in the high BYK quality you have come to expect! 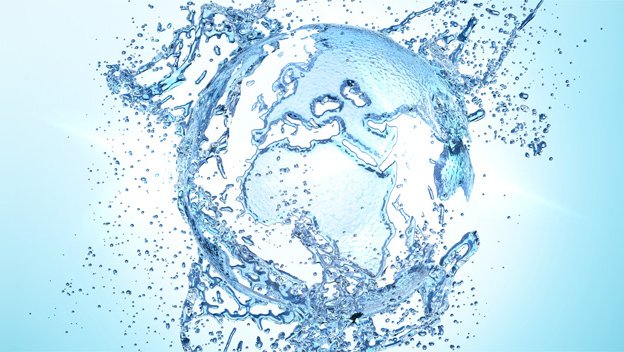 Here we present some highlights for aqueous systems:

Overview of Wetting and Dispersing Additives

DISPERBYK-2015 is a specialist for high-quality, aqueous pigment concentrates, which was developed based on CPT (controlled polymerization technology). This technology enables a close, defined molecular weight distribution that guarantees an application in many different binder systems. DISPERBYK-2015 enables a high level of gloss and exceptional color strengths with optimum viscosity and good leveling properties.

Overview of Wetting and Dispersing Additives

In 2017, BYK introduced the BYK-1781 additive in order to reduce the occurrence of microfoam in the coating resulting from difficult application methods such as spray painting (HVLP), airless and airmix applications. The new BYK-1786 is the emulsion of BYK-1781. In this form, the additive is easier to incorporate and dose. BYK-1786 is particularly recommended for pigmented and unpigmented architectural, general industrial, protective, wood and furniture coatings, as well as floor coatings, adhesives, sealants, care products and polishes. The additive is VOC- and APEO free and has no impact on transparency, haze, and cratering. 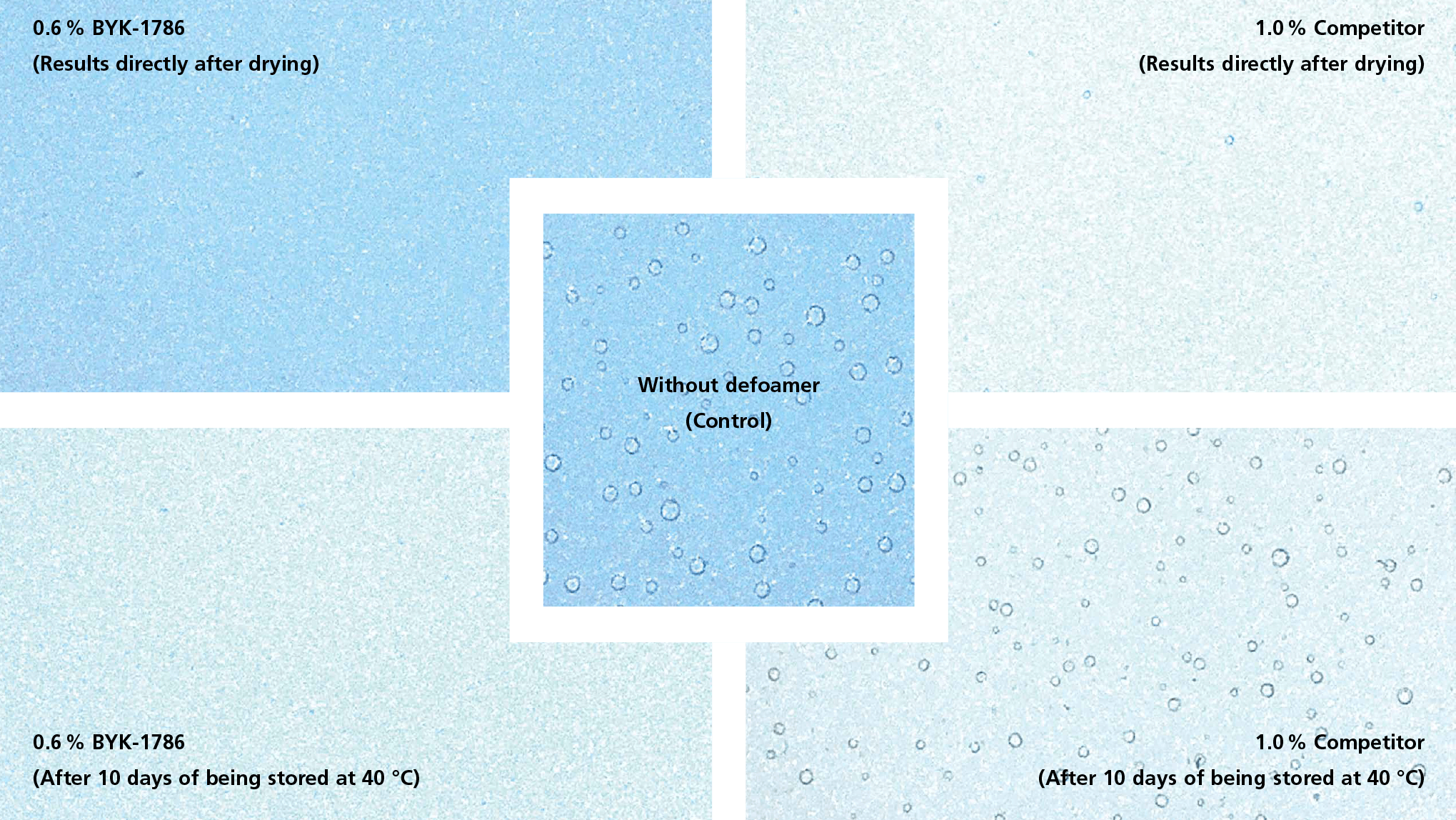 BYK-093 is an additional VOC-free silicone-containing defoamer for aqueous wood, architectural and industrial coatings. It is all-purpose and therefore excellently suited as a standard defoamer in the formulation of aqueous systems. Due to its balanced compatibility, it causes virtually no surface defects such as cratering or fogging. BYK-093 can be used both in pigmented and non-pigmented coatings, and is particularly recommended for contemporary, co-solvent-free binders which form the basis of VOC-free or low-VOC formulations. BYK-093 also supports the excellent long-term stability of the finished coating (both at high as well as low temperatures), is easy to incorporate, and suitable for all standard types of application.

BYK-3760 is a unique, highly active polyether-modified polysiloxane. As a result of its low tendency to stabilize foam, BYK-3760 can also be used in applications that involve high shear forces. The additive remains fully effective, even at a very low dosage. At the same time, its outstanding compatibility means that it can be used in a wide variety of resin systems. BYK-3760 is the first representative of a series of new silicone additives that run through an additional production step in which virtually all cyclic siloxanes are removed (D4–D6). As a result, BYK-3760 corresponds to the latest requirements of common ecolabels such as EU Ecolabel, Nordic Swan, Blauer Engel, as well as the specifications for use in food contact applications. BYK-3760 is a modern, highly effective, and universal silicone additive which is produced according to the latest BYK technology standards and recommended for usage in 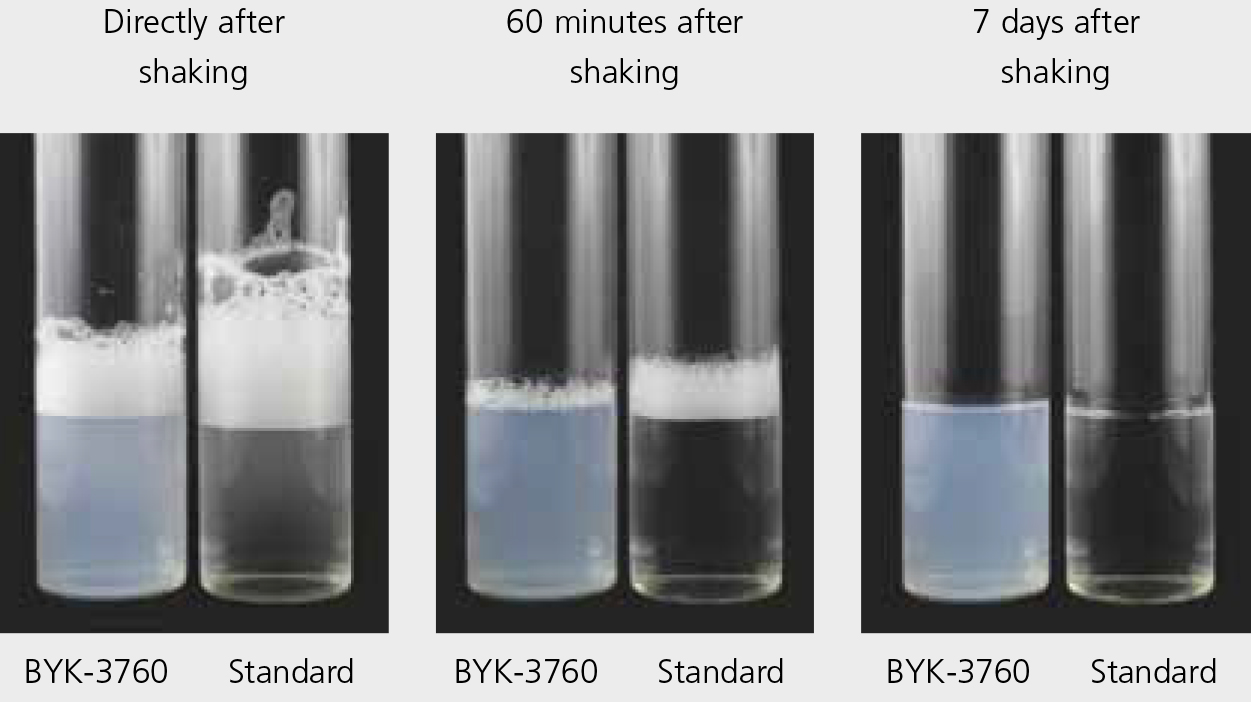 Notes: BYK-3760 has an emulsifying effect in water (highly compatible). It is also highly effective in aqueous systems with a low proportion of co-solvents. Test system and method: 30 ml water and 0.5 ml BYK-3760 is mixed in a cylinder and shaken manually. The foam formation or stabilization is evaluated.

Efficient substrate wetting and outstanding leveling are not guaranteed in every system nor are they easy to achieve. A particular challenge is posed by aqueous systems owing to the high surface tension of the medium, and UV systems, which are critical based on their rapid curing and high application speeds. It is for these specific systems that BYK has developed BYK-3456. It is a fluorine-free silicone additive that greatly reduces the dynamic and static surface tension. Even rough and porous substrates (e.g. wood) are wetted perfectly. As BYK-3456 is active both at the interface to the substrate and at the surface, the additive simultaneously improves substrate wetting and leveling. In contrast with many other additives, however, BYK-3456 does not stabilize foam. And there is no negative impact on the recoatability of the system. The additive is compatible with a multitude of resins and stable to hydrolysis across a broad pH range. This is why it is recommended for so many applications: 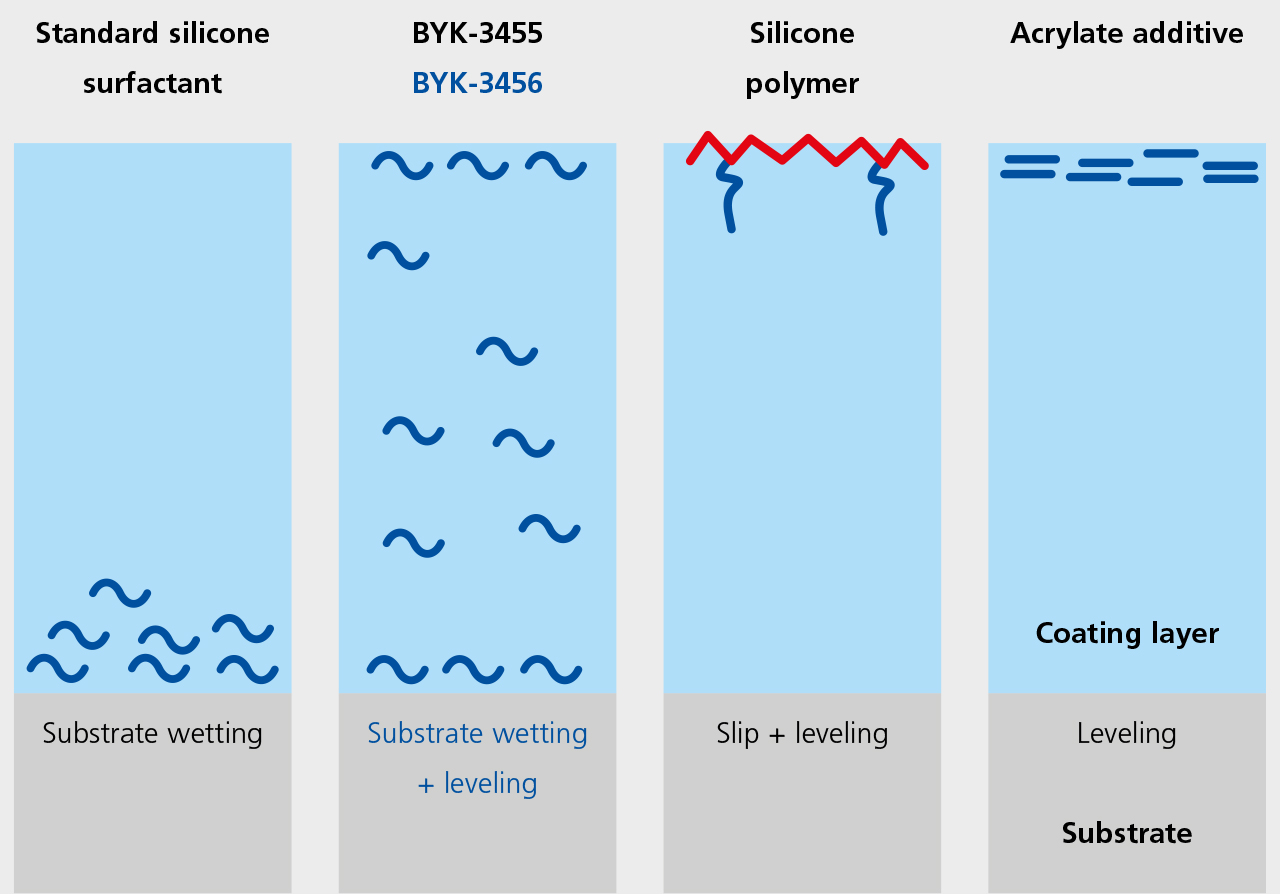 Over the past years, the focus of developments in protective coatings has increasingly moved to aqueous systems based on epoxy dispersions. These coatings are highly pigmented and applied in thick layers, requiring the rheological properties to be controlled using a suitable additive. The established products are only slightly or even not at all effective, and some are completely incompatible in epoxy dispersions.
The new, polyamide-based RHEOBYK-440, however, is a tailor-made solution for these modern, water-based systems. RHEOBYK-440 does not only provide outstanding anti-sagging and anti-settling properties in water-based protective coatings, it is also recommended for usage in many other applications such as automotive coatings, general industrial coatings, wood and furniture coatings, architectural costings and floor coatings. It can also be used e.g. to achieve a good effect pigment orientation.

Test system: Aqueous, 2-pack epoxy system based on: EPI-REZ* 7520-WD-52/EPIKURE* 6870-W-53; Additive dosage: 0.5 % active substance based on component A Test of active substance: Draw down on contrast card with automatic applicator directly after mixing of components A and B. *EPI-REZ and EPIKURE are registered trademarks of Hexion

The addition of pigment concentrates in a basic paint to achieve the desired color can cause problems with regard to rheological behavior. Any co-solvents, imported water or wetting and dispersing additives contained in the pigment concentrates can bring about a significant reduction in the viscosity of the finished paint. With RHEOBYK-7600, BYK is offering a unique associative thickener based on a new technology. RHEOBYK-7600 leads to a considerable increase in the viscosity in the low shear range, stabilizes the viscosity when the colorant is added, and improves the color paste acceptance. The new additive also offers a significantly better leveling properties. As well as being VOC-, APEO-, and tin-free, RHEOBYK-7600 is also liquid, which facilitates incorporation and handling. Due to its composition, it is highly compatible in many aqueous systems. The sagging tendency and the storage stability are improved.

RHEOBYK-7600 – Theoretical Consideration of the Viscosity Stability After Tinting

RHEOBYK-7610 is an associative thickener for aqueous systems. It generates a highly pseudoplastic flow behavior and considerably increases the viscosity in the low shear range. The most impressive feature, however, is the outstanding self-leveling properties of the finished system. For this reason, alongside good anti-sagging, e.g. at airless/airmix/HVLP application, RHEOBYK-7610 simultaneously offers a perfect surface due to its self-leveling effect. The storage stability and the colorant acceptance have also been improved. Moreover, the foaming behavior of RHEOBYK-7610 is a noteworthy aspect. The additive is liquid and easy to handle. It is not necessary to adjust the pH value or control the temperature during incorporation. 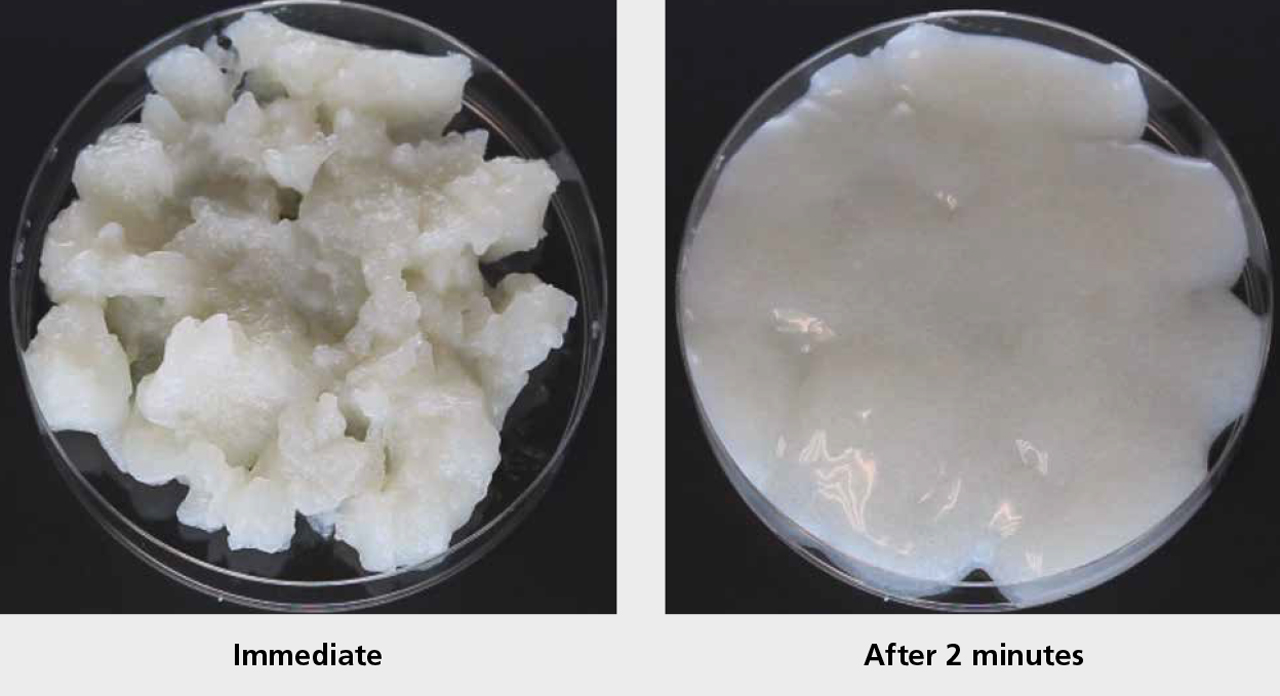 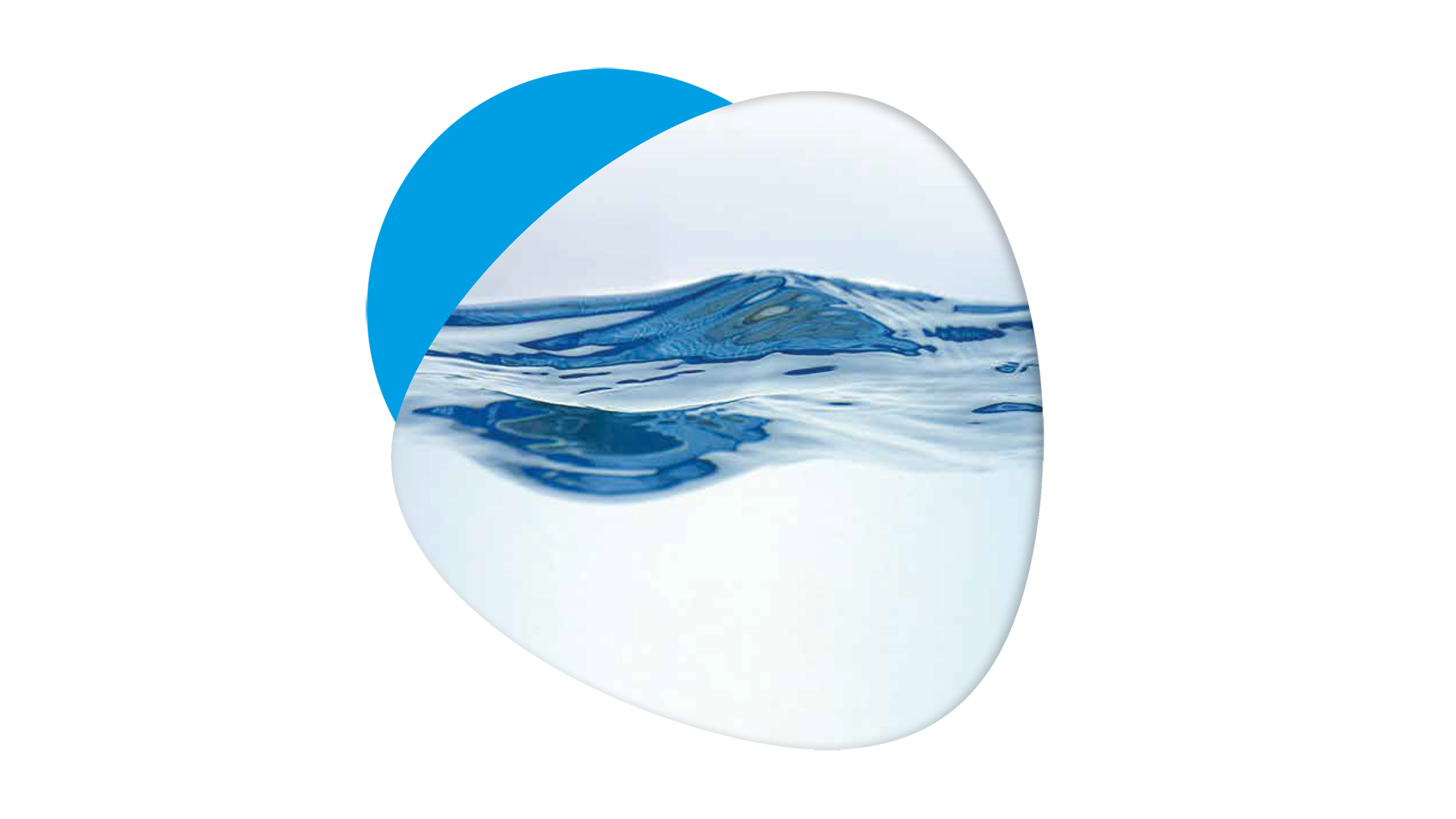 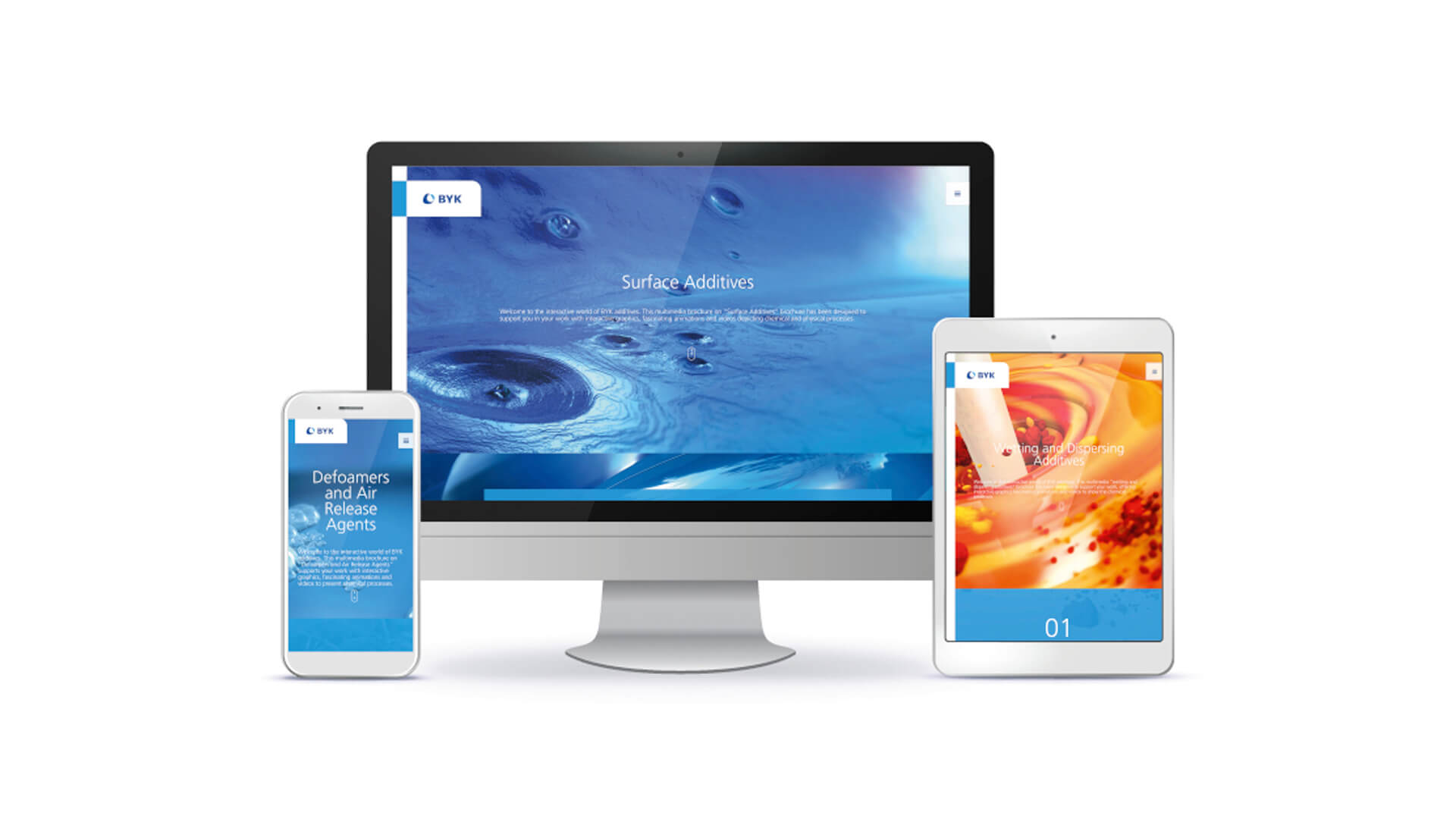 You will find more information in our e-books which provide interactive graphics, fascinating animations and videos. 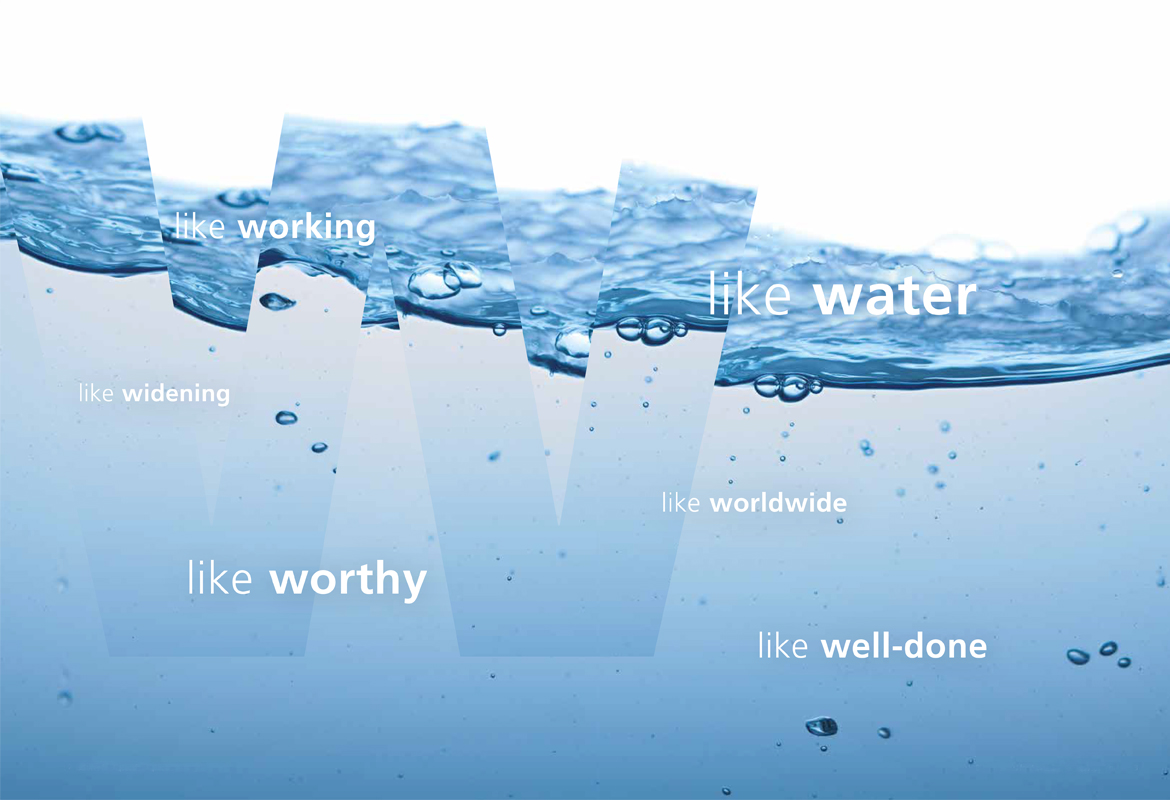