ALTANA achieved double-digit growth in the first half of 2021. In the first six months of the year, the specialty chemicals group’s sales rose by 24 percent to 1,334 million euros compared to the same period of the previous year (1,078 million euros), which was significantly influenced by the coronavirus pandemic. The sales increase was driven by strong demand for ALTANA solutions in almost all sales segments. Adjusted for acquisition and exchange-rate effects, sales were up by 26 percent. Earnings before interest, taxes, depreciation and amortization (EBITDA) increased to 283 million euros, 40 percent above the previous year’s figure (202 million euros). Owing to demand, the EBITDA margin reached 21.2 percent in the first half of 2021, thus exceeding the company’s long-term target range of 18 to 20 percent and the same period of 2020 (18.7 percent).

In the first six months, ALTANA once again spent a considerable amount on research and development, over 80 million euros, and achieved important milestones in innovation, climate protection, and digitalization. In April, for example, the BYK division began operating a digital high-performance laboratory that is unique in the specialty chemicals industry. This high-throughput screening facility is the largest of its kind in the world and doubles BYK’s capacity in application technology. In June, the ACTEGA division launched Signite, a new technology that can halve waste from consumer goods label production.

On its way to CO2 neutrality by 2025, the ALTANA Group reported its first nearly CO2-free sites: ACTEGA in Brazil and Bremen, as well as ACTEGA in Foshan and ECKART in Zhuhai (both in China). All four sites have cut their CO2 emissions by more than 95 percent each.

"Our strong half-year results once again highlight how robustly ALTANA is positioned for the future," said ALTANA CEO Martin Babilas. "With our innovative solutions for increasingly sustainable products for everyday life and our program to achieve climate neutrality by 2025, we are moving our customers forward and at the same time ALTANA as a responsible company."

As recently as June, the European Investment Bank (EIB) recognized ALTANA's climate protection efforts in line with the EU's Green Deal and provided the company with a € 200 million credit line for further green research projects. Almost simultaneously, ALTANA secured another credit line with a sustainability component amounting to € 250 million from an international banking consortium. For the first time, the interest rate is also linked to the company's performance in terms of climate neutrality and occupational safety. In concrete terms, this means that "If we achieve our sustainability goals, we will also benefit economically," says ALTANA CFO Stefan Genten.

Double-digit growth in all divisions

In the first half of 2021, all four divisions recorded double-digit growth rates. The largest division, BYK, achieved sales of 631 million euros, a 25 percent increase in a year-to-year comparison. Adjusted for exchange-rate effects, sales grew by 29 percent.

The effect pigments specialist ECKART generated sales of 195 million euros, corresponding to 26-percent growth (27 percent in operational terms). The division received the ALTANA Innovation Award in 2021 for a pioneering technology in the field of ecologically compatible automotive coatings. In February, ECKART completed the acquisition of the TLS business with metal powders for 3D printing.

The ELANTAS division, whose innovative insulating materials are increasingly being used to expand e-mobility, posted sales of 284 million euros, up 30 percent on the previous year, and 34 percent in operational terms.

ACTEGA’s sales increased by 11 percent to 222 million euros. Adjusted for acquisition and foreign exchange effects, the increase was 10 percent. The acquisition of Henkel's closure materials business in May to strengthen PVC-free solutions in this area will have a special impact on earnings in the second half of the year.

Strong growth in all regions of the world, China up almost 50 percent

In the first half of 2021, ALTANA achieved double-digit growth rates in all regions of the world. Sales in Europe, which continues to be the Group’s strongest sales, reached 526 million euros, corresponding to an increase of 24 percent (22 percent in operational terms). Sales growth in Germany was 23 and 21 percent, respectively. In the Americas, ALTANA reported sales of 330 million euros, 12 percent higher than in the same period of the previous year. Adjusted for exchange-rate effects, sales in this region rose by 22 percent. The Group achieved its most significant growth in Asia, where sales increased by 33 percent (35 percent in operational terms) to 452 million euros. The driver of this development was the Chinese market, with growth of 47 percent (both nominal and operating growth).

Due to its excellent business performance in the first six months of 2021, ALTANA is raising its sales forecast for the full year. Instead of operating sales growth in the low to mid single-digit percentage range, as originally expected, the company now anticipates low double-digit growth. 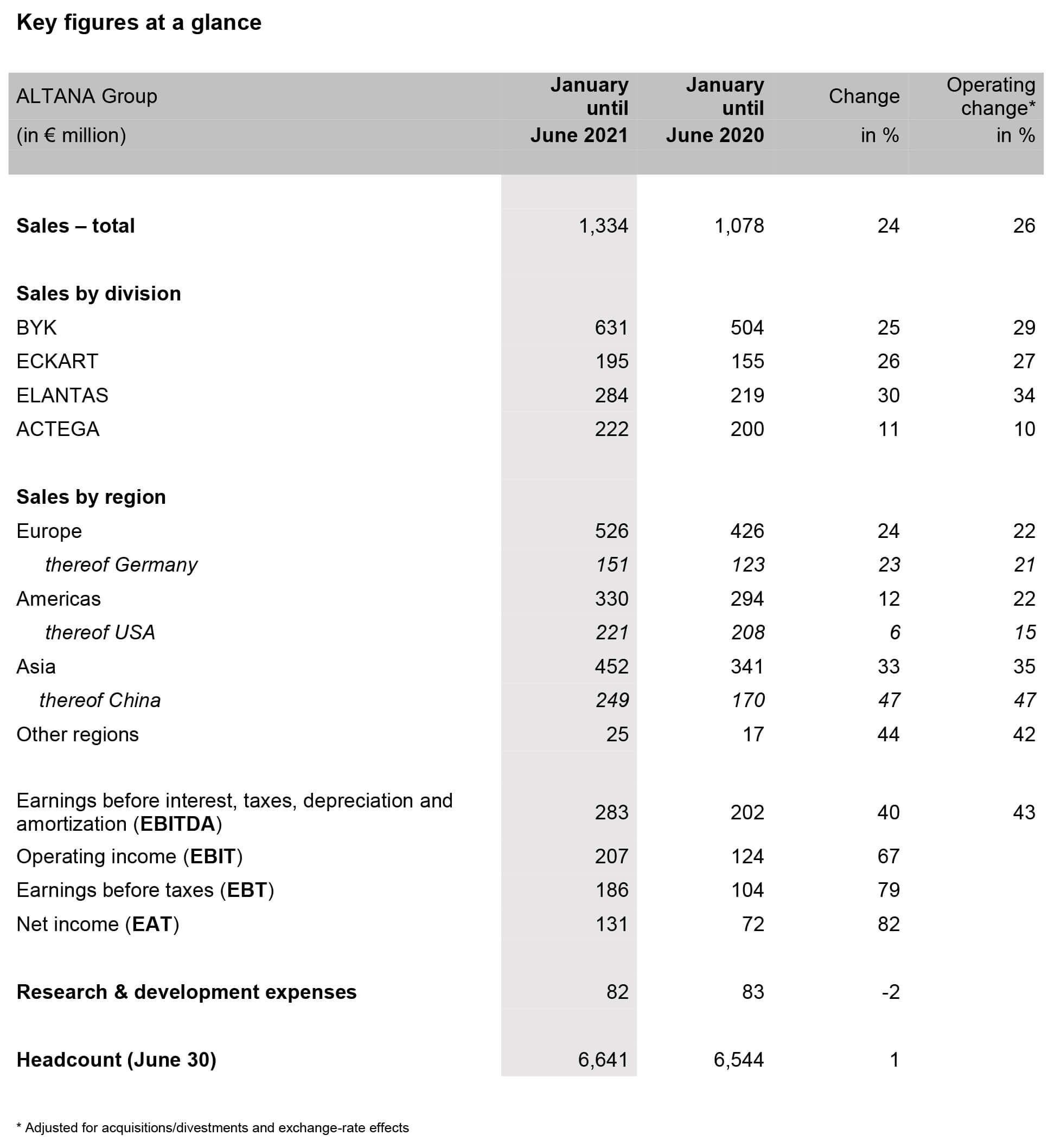 ALTANA is a global leader in true specialty chemicals. The Group offers innovative, environmentally compatible solutions for coating manufacturers, paint and plastics processors, the printing and packaging industries, the cosmetics sector and the electrical and electronics industry. The product range includes additives, special coatings and adhesives, effect pigments, sealants and compounds, impregnating resins and varnishes, and testing and measuring instruments. ALTANA's four divisions, BYK, ECKART, ELANTAS, and ACTEGA, all occupy a leading position in their target markets with respect to quality, productsolution expertise, innovation and service.

Headquartered in Wesel, Germany, the ALTANA Group has 48 production facilities and 65 service and research laboratories worldwide. Throughout the Group more than 6,500 people work to ensure the worldwide success of ALTANA. In 2020, ALTANA achieved sales of about € 2.2 billion. About 7 percent of sales is invested in research and development every year. Its high earning power and high growth rate make ALTANA one of the most innovative, fastest growing, and profitable chemical companies in the world.