Wesel/Düsseldorf, March 20, 2020 – In the 2019 fiscal year, the specialty chemicals Group ALTANA held its ground in a challenging market environment and at the same time set the course for further growth. Sales amounted to € 2,249 million and were thus nearly 3 percent below the level of the previous year, which was still characterized by a strong first half in economic terms. The main reasons for this were the continuing sluggish demand in key industrial sectors, especially the automotive industry, and the general economic slowdown, especially in China. Adjusted for acquisition and exchange-rate effects, sales decreased by 4 percent. Earnings before interest, taxes, depreciation and amortization (EBITDA) fell by 3 percent to € 416 million. At 18.5 percent, the EBITDA margin was roughly at the previous year’s level despite further increases in expenditure, particularly for research and development and digitization, and thus within the long-term target range of 18 to 20 percent.

The ALTANA Group increased its research and development expenses by 7 percent. With a share of sales of also 7 percent, ALTANA continues to invest above-average amounts in innovations and new technologies, for example in the future digital printing market. For instance, ALTANA’s internal startup ACTEGA Metal Print is about to launch a technology that achieves decorative metallic effects with considerably less material, costs, and production time than the processes that have been commonly used thus far. The up-and-coming printer manufacturer dp polar, in which ALTANA has held a stake since 2017, brought the first 3D printing system with a rotating printing platform onto the market in 2019 using the specialty chemicals Group’s material development knowhow. The system enables highly precise components to be produced up to 20 times faster.

“We invested heavily in promising growth projects in order to remain on course for sustained success. Even in a challenging market environment, we succeeded in achieving our long-term profitability targets,” said Martin Babilas, CEO of ALTANA AG. “We therefore once again demonstrated our high innovative and financial strength.”

The sales of the largest division, BYK, fell by 2 percent to € 1,041 million. Particularly the acquisition of the U.S. Paul N. Gardner Company had a positive effect. Adjusted for acquisition and exchange-rate effects, sales were 4 percent down on the strong level of the previous year.

The effect pigment specialist ECKART achieved sales of € 356 million, representing a 7 percent decrease. The discontinuation of trading with white pigments in China contributed to this development. Adjusted for this special effect and exchange-rate effects, sales declined by 6 percent.

ELANTAS, the supplier of electrical insulation materials, recorded sales of € 495 million, 2 percent below the previous year’s figure (4 percent in operating terms). The acquisition of the wire enamel business of Hubergroup India, which was completed in December 2019, will help to strengthen ELANTAS in the growth market India starting in 2020.

ACTEGA continued to grow in the 2019 fiscal year. Due to the persistently strong demand for coating and packaging solutions from consumer-related customer industries, the division increased its sales by 1 percent to € 358 million. Adjusted for positive exchange-rate effects, sales were slightly above the previous year’s level.

Stable development in Europe, high investments in the future

The ALTANA Group’s sales continued to be evenly distributed worldwide, but there were regional differences in the 2019 fiscal year. Europe, which still is the region with the highest sales, reached € 858 million and remained stable overall with a slight decrease of 2 percent. Sales in Asia fell by 5 percent to € 732 million. Adjusted for positive exchange-rate effects, the operating sales decline was 6 percent. Operating sales in America were down 5 percent. Due to positive acquisition and exchange-rate effects ALTANA almost reached the previous year’s level, with only a slight decline of 1 percent to € 621 million.

In 2019, ALTANA pushed ahead with the expansion of its sites and production capacities in all regions of the world. In April, the Group opened a new integrated BYK site in Shanghai. In June, a new ACTEGA innovation center began operations in Grevenbroich (Germany), and in December, ACTEGA opened a new integrated site in the Brazilian city of Araçariguama. ALTANA is currently significantly expanding BYK's U.S. site in Gonzales and ACTEGA’s site in Bremen. Expansion projects are also underway in Deventer in the Netherlands and Tongling in China. At the Group’s headquarters in Wesel, ALTANA opened a new state-of-the-art building that offers the Group’s IT and digital experts an innovative working environment.

ALTANA is investing heavily in digitization. In the first half of the year, for example, two new e-commerce platforms at BYK and ACTEGA went online. In the next three years, the specialty chemicals group plans to spend almost € 40 million on this future-oriented area. € 15 million alone will be invested in a so-called High Throughput Screening facility at the company’s headquarters in Wesel. It will enable product tests to be carried out with enormous speed and efficiency at the highest level of quality. As a result, customers can be offered tailor-made solutions even faster.

In its planning for the 2020 fiscal year, ALTANA had assumed there would be slightly stronger global economic growth in the second half of the year. In this environment, the Group had expected operating sales growth in the low single-digit percentage range and further growth through the acquisitions already completed. In such a scenario, the EBITDA margin would have been in the lower third of the long-term target range of 18 to 20 percent. However, the further course of the coronavirus pandemic and its impact on demand, production, and supply processes cannot be assessed at present. Although ALTANA achieved slight sales and earnings growth in the first months of the current year, the coronavirus pandemic will have a significant impact on the sales development and earnings situation in the coming months.

Regardless of the business development, the ALTANA Group is sticking to its goal of achieving climate neutrality in its direct sphere of influence by 2025. In the current fiscal year, the company’s entire power supply will already be converted to renewable energies.

The press conference presentation, photo material, and the Corporate Report 2019 can be downloaded at www.altana.com.

Further information on climate neutrality can be found at www.altana.com/climateneutral2025 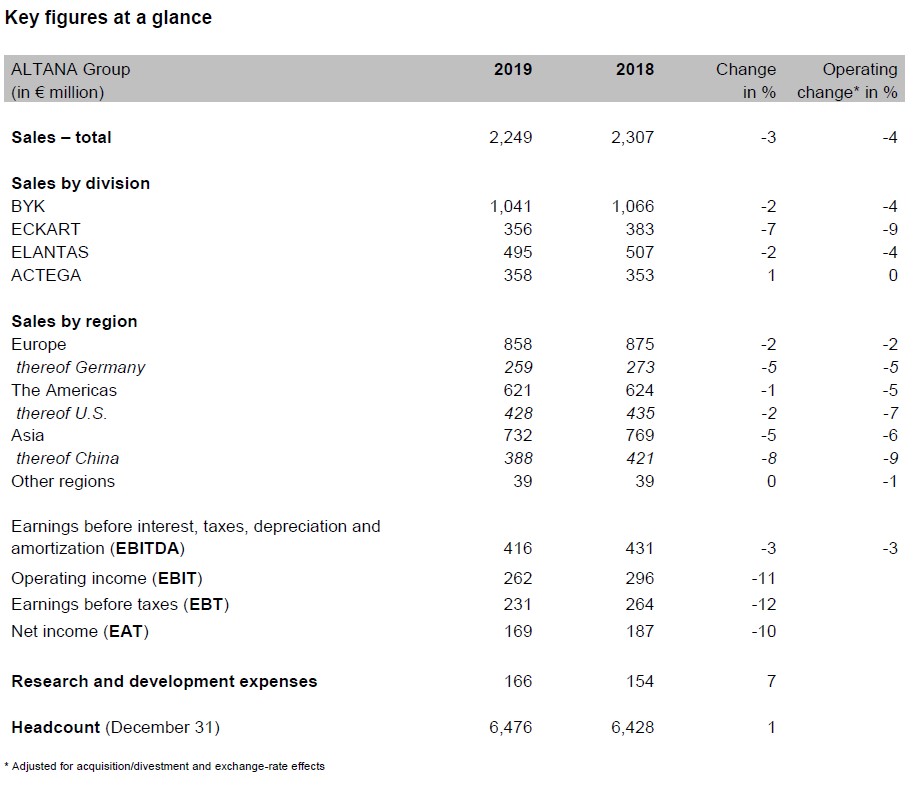 Headquartered in Wesel, Germany, the ALTANA Group has 47 production facilities and more than 65 service and research laboratories worldwide. Throughout the Group about 6,500 people work to ensure the worldwide success of ALTANA. In 2019, ALTANA achieved sales of more than € 2.2 billion. About 7 percent of sales are invested in research and development every year. Its high earning power and high growth rate make ALTANA one of the most innovative, fastest growing, and profitable chemical companies in the world.